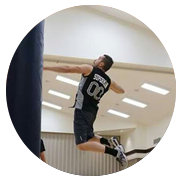 I have played on a top 25 ranked team at a DI college. I have experience in all aspects of the game. I have coached doubles sand players to specific positions on indoor court, from MH, OH to setters and defense specialists.

In-Person Training for a single athlete

I have been a member of the AVCA and part of the USAV for years. I have had my IMPACT certifications and various other coaching certifications.

Defensive Specialist and Outside Hitter

I have coached various sports for about 15 years, but started to focus on the sport that I love in 2011. I have been both a coach and a volleyball club owner/director since 2011. . I have coached top teams at 12, 14, 15, 16, 17, and 18’s age groups. I have coached teams who enjoyed great success with many gold bracket tournament championships. I have also qualified multiple teams to the regional championships. I have a proven record of coaching players that have gone on to play at the collegiate level. I love helping volleyball players reach their goals with theirs skills and their families support.
In 1992, I played for the men’s Texas Tech University volleyball team. After making the team, I went on and played every year of my college career, as both a hitter and defensive specialist. I have played on multiple top 25 collegiate volleyball teams while playing for Texas Tech University, while sharing the court with olympic and professional athletes. In addition, he has numerous outdoor and indoor championships under his belt.
Each session is 1hr long. Session plan is based on the client’s need.